The red riders were away at 8.30 and seen heading out to the Birkin cafe.  The blue riders weren’t the only people around though as there was a cricket tournament on and preparations were beginning.  At nine o’clock there were thirteen of us gathered and it was decided that two groups would be best so Stewart took charge of the second group with Martin taking up the role of back marker.

Thus this report starts with reporting what happened in the first group.  Well to be honest, the usual stuff.  Riding, chatting, more riding... usual suspects for both.  We rode into Bawtry and picked Paul Elwell up and made our way to Austerfield and Misson.  One rider needed a comfort break so was allowed off the front and the other riders slowed sufficiently for the second group to catch up and the aforementioned individual to catch up too.

Single file down Sandersons Bank, which was busy as usual.  Then left up Idle Bank; no quizzes today.  Chatting certainly makes this very straight road pass a little quicker and before we knew it we were turning right onto Wroot Road.  I can’t quite remember where it was but we saw a lone rider coming towards us... was it... could it be... yes... it was a Pete.  It was a straight forward ride into Epworth and the placing the bikes in the secure storage they provide (thanks Epworth Garden Centre, it’s much appreciated).  I joined the end of the queue but they served us quickly and in no time I was seated with my cycling friends but couldn’t see Pete anywhere.  Oh well, we’ll have to share a coffee next time.  A pleasant time passed with, yes, you guessed it, cake, coffee, sandwiches and friendly banter.

The ride home was via Owston Ferry; West Stockwith and Misterton.  We were concerned that we hadn’t seen the other group for a while so waited to find that they’d had a mechanical with a pesky chain deciding to remove itself from where it’s supposed to be.  A group shuffle was organised as people were planning their routes home and deciding when to leave the party.  Helen wished to ride with the second group so we asked for a swap and Clair volunteered. “That’s not a fair swap,” was heard and I wouldn’t have mentioned it but the same individual was responsible for missing me out of last week’s report when I spotted a flat whilst we were on the move!  Just saying.  We continued on to Walkeringham and took the right turn towards Gringley.  As usual with upness we became a little strung out from time to time but regrouped at the top of Gringley hill.

As we mosied on, riders left the group as we neared their more direct routes home.  Six of us made it back to Tickhill where there was a ladies tournament in full swing (full swing... get it?  cricket... swing...)  If you’ve read this far you’re in for the best bit.  As I type I pause, not sure of how to continue.  We were chatting; humour was involved as was a certain subject brought up by one of our more senior members (senior as in years and riding).  Not sure how to broach this one.  It rhymes with the police officer on Top Cat.  You had to be there.

The red riders returned and we got down to what cycling is all about.  Sitting in the sunshine, with good friends a drink and watching cricket (the last one is optional depending on where you are at the time).  Thanks for turning up folks, it was very enjoyable; let’s do it all again next week.  Same start; same time; different place. 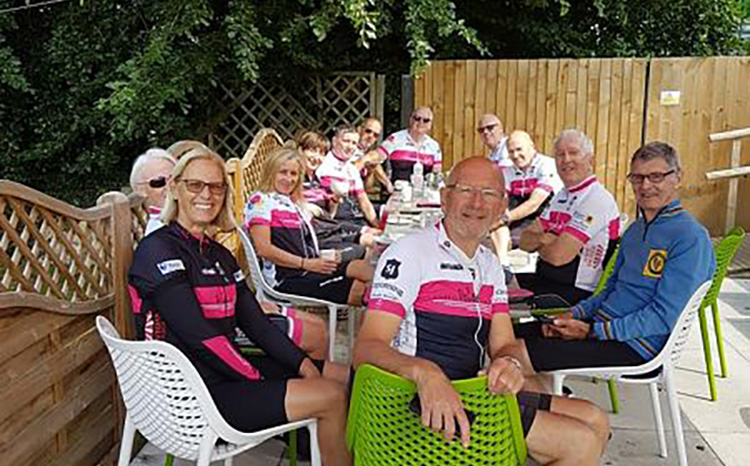 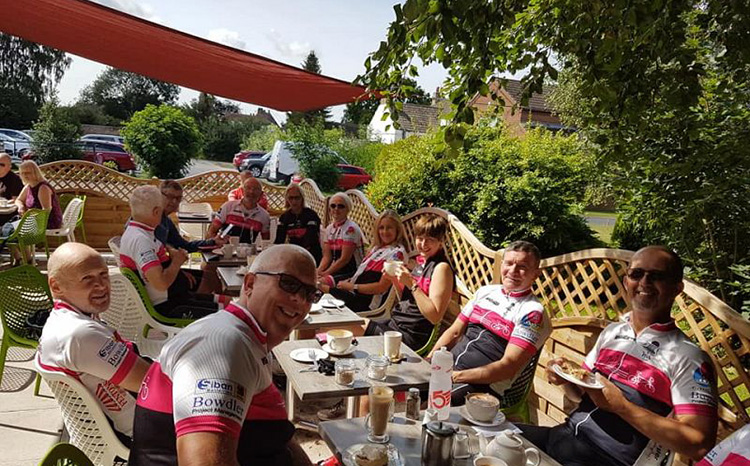 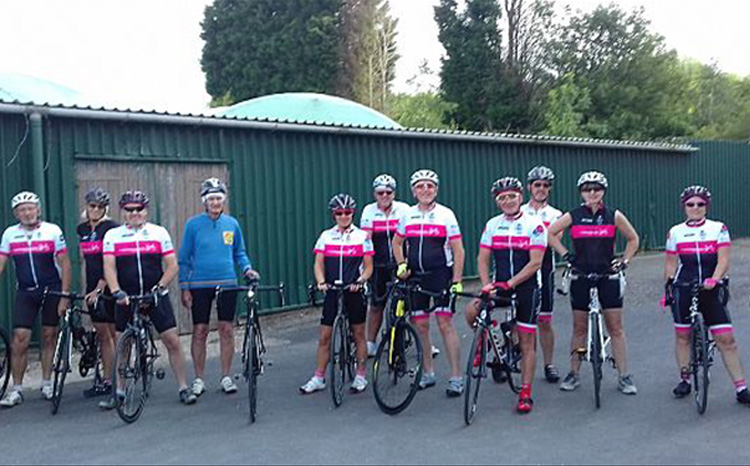 The usual crowd gathered inside (for a warm) and the usual suspects were outside.  Comfort was given to those riders missing their friends who were on other duties and we managed to vacate the changing room before the mystery door closer was able to act...  Most seemed to opt for late winter/early spring attire with only a few riders sporting shorts.  Madness or folly... in my case I feel it was folly.  We had one holiday form for next week and a couple of notes of absence... one due to decorating I believe (lie in...)

Our red riding friends left us and the pre talk was soon all done and dusted...  “Ready!”  We left via the more usual right out of the car park and left at the junction.  There being only eight of us we were soon, and I don’t say this lightly, formed into four perfect pairs.  We headed out for Bawtry and it wasn’t long before our perfect eight was a sort of stretched out formation more suited to eleven peeps kicking a ball around.  However, we were soon back in shape and stayed thus for almost all of the remainder of the ride.  We navigated Bawtry, the right turn in Austerfield and onwards through Misson.  It may have been chilly but we maintained a comfortable pace, had interesting conversation and enjoyed the fresh air and so the miles ticked by.

At the junction onto Sanderson’s Bank we nearly convinced certain members of the group that there was a ‘straight on’ option (yes the picture is from street view but you get the picture... get it?  picture...hmmm)  Anyways we turned right of course and next left up the long, straight Idle Bank.  In quite a state in places despite having been repaired only recently.  We took the right on Wroot Road which means that we missed the swan’s nest by some five hundred feet (I saw it on the way in).  No mention of the Turbary this morning which was a bit of a shame but we motored on into Epworth and up their newly surfaced entrance.  Diana did the honours and found a very nice man who let us put our bikes with his plants and such like.  It’s something when you can stay dry on a ride but have to dodge the sprinklers in the garden centre!

As always at the Lemon Tree the service was very good, the food was very good, the value... you get the picture (oh, I’ve done that one before methinks).  After refreshments the shuttle service operated to the toilets, a very kind lady took two photographs (I’ll spare you the one with part of Martin’s head missing), we recovered our bikes and we had a brief discussion about the route home (to Gringley or not to Gringley, that was the question).

Matt took us to Owston Ferry and then inland rather than follow the river to East Stockwith (home of the Idle Brewery) through Walkeringham and to Gringley.  Diana opted for Walkeringham, Beckingham and the A631 up to Gringley.  We were just having a moment at the top of Beacon Hill Road when who should appear from the dual carriageway but Diana – great timing.  It was then a formality returning to Tickhill via Clayworth, Mattersey, Mattersey Thorpe, Ranskill and Harworth.  Some riders took the option to go straight home on the way home but a happy band of riders made it back.

No mechanicals, medicals or other mis-adventures today (oh there was... we thought we had a loose rear wheel but it wasn’t confirmed) – just a very enjoyable ride with a great stop and great company.  Thanks Matt. 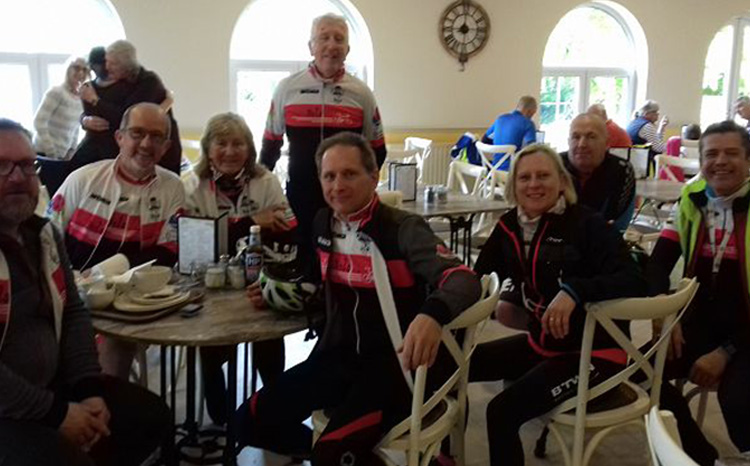