This morning was a bit warmer than last week which was a good job as the changing rooms were taken up with a Christmas wreath work shop so we were out side for the Red, Blue and Purple ride briefings. We welcomed a visitor John Hibbert to our 40 miles Red ride to Fishlakes and the Old Butchers. Out of the cricket club we took a detour through the Estate to miss the road works on Sunderland Street, but we were soon on familiar roads heading out of Tickhill passed Wellies and on to Bawtry. 10 riders made a nice tight peloton as we headed out of Bawtry and through Austerfield to Blaxton with nonstop conversation about work, Brexit and I’m a Celebrity get me out of here.

Passing over the time trial course we turned left in Hatfield still talking about when does a bar become a rod when it’s in a rolling Mill and the cost of crane hire, all stimulating stuff passing the time and miles as we passed through Thorne, under the M18 then turned left at the bizarre junction that has a wall in the middle of the road.

Over a rickety bridge and it was less than a Martin mile to the cafe and some fuel. The Old Butchers cafe is a top venue and was warm & welcoming when we arrived and took over a couple of tables. The bizarre I’m a Celebrity conversation continued mostly around Holly Willoughby’s cowboy boots, Noel Edmonds fee and the political correctness of fairy tales while we refuelled. Time to get back on the road so after the usual group photo we headed out of Fishlakes and into Stainforth and eventually Hatfield where we turned right on to the time trial course for part of the return journey.

The head wind we turned into here started to take its toll on the long open straights, but Jonathan and David did a sterling job on the front until the pace took its toll and an “A” group pulled ahead. The “A” team were well ahead by Blaxton roundabout so carried straight on towards Austerfield rather than taking the planned right turn to Tickhill via Auckley and Rossington. Oh well on we pressed back through Austerfield, into Bawtry and finally back into Tickhill. 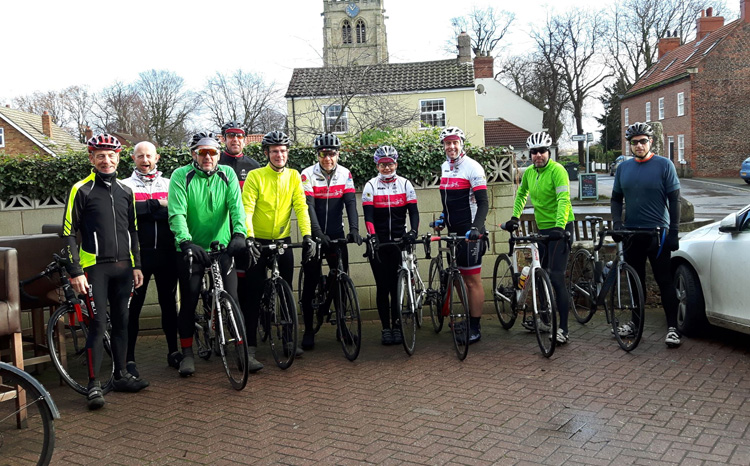