It was cloudy and there was a slight chill in the air as we had a slightly reduced number of riders meeting to head off to Barnburgh Lakes.  It was a pleasure to meet Nathan on his first club ride (preparing for his night ride next Saturday) and welcome back Diane after her absence.

We were considering the two holiday forms and two sick forms when Mick said he had a note from his mum saying he wasn’t allowed to be at the front of the ride!  (more later)

I think we were fairly prompt at setting off and we made our way through the village and out on Wilsic Lane.  With just eight of us each rider had a partner and one could hear the jolly banter of riders enjoying themselves as we made our way to Wadworth.  We had previously discussed this part of the ride and had decided to detour from the original route by spending a little time on the A60, rather than trying to navigate and debris and gravel on Tofield Road.

The ride through Balby and up to Warmsworth was smooth and uneventful, except for the guy on the mountain bike who got to the traffic lights before us.  Hilary and I were at the front and we were impressed with the acceleration of the guy from the lights, but even more impressed when we were passed by another rider, on a road bike, who caught him in a very short space of time.  Mill Lane through Sprotborough was dry and clear of any stuff and we regrouped on Main Street, twenty feet down the road from a group of cyclists who, by their shirts, I think were from Retford.

So far so good... but then we rode on to the crossroads.  Road Closed.  A manned junction with a very nice gentleman telling us that the road was, as the sign said, closed.  Apparently there was a 10k run happening.  Plan B.  Now, no one had handed anything in at the start of the ride that remotely resembled a Plan B so we turned left, as directed and discussed our options.  We, well some of we, thought Folder Lane would be the answer but thanks to one or two folks knowing the area we were spared the embarrassment of riding around the estate for the next two hours.  Kevin had Plan B.  I think someone had sneaked it into his back pocket when he wasn’t looking.  Reverse the ride.  Genius.

Now I knew how to get to the cafe stop.  Not hard really, just stay on the main road.  I’ve not really ridden a great deal with Martin Bagshaw but I felt his inspiring, ride leader aura helping me on.  We filed into the cafe, were shown to two tables and perused the menu.  Pancakes... oh my.  We ate, we drank, we chatted and we thoroughly enjoyed ourselves (there was only one taker for pancakes I believe, others being more traditional with sandwiches).  I hadn’t noticed the cake on the way in.  Have you noticed it on your visits?  It’s on the counter, on the far right.  Careful consideration needed for the next visit.  (Great selfie Hilary!)

So, our reverse route took us up the hill into Barnburgh.  Well it took seven eighths (87.5% for those of you trying to work it out) up to Barnburgh.  No Pete.  Nathan relayed the situation and message; chain off, keep going I’ll catch you up.  We were running out of things to discuss (come back Christina and Clair) so Kevin volunteered to check up on Pete.  Owen was about to ‘phone his dad when we heard/saw (depending upon who you were) them coming round the corner.  A previous fall had seemingly bent Pete’s derailleur which was now causing his chain to jump off.  It also seemed to want to stay off and was being very difficult in not behaving and jamming between the stay and the cassette.  But you can’t keep a good man down and two good men, well...

We cycled up and down through Hickleton and Brodsworth (Mick forgot all about the note from his mum...) and back along the road which was closed previously.  Back through Sprotborough and up Mill Lane.  At this point I was sort of at the back with Kevin and we agreed that Nathan would have no difficulty riding next weekend as he powered his way back to the top.  We regrouped and decided to have a bit of a detour home by the way of Edlington, saying bye to Kevin and Owen.

A bit further on we wished Hilary safe travels home and continued on, the only challenge being the amount of gravel washed to the bottom of Apy Hill Lane.  A quick ride down Rawson Road, round the butter cross and we were back at the cricket club.

What’s great about cycling?  Well today, eight people who had never ridden together before, met up and went for a ride and hopefully enjoyed it as much as I did ‘cos I thought it was brill’. 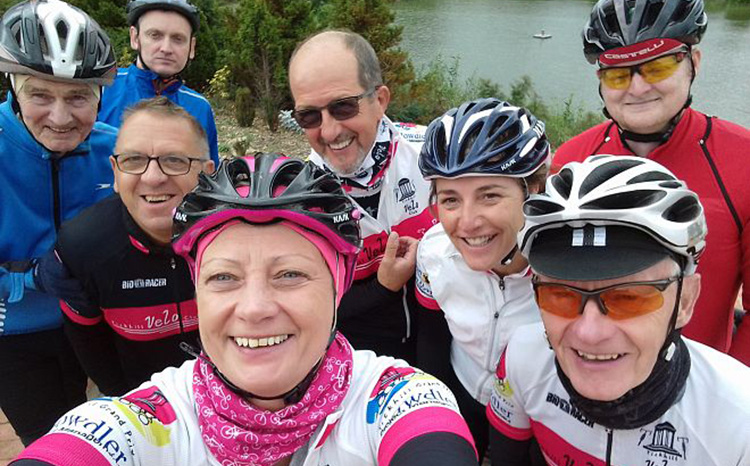