Twelveteen riders assembled on a cool, cloudy, January morning for the 9:30 ride.  Two by two, Matt led us along the A631 with only the up and down of the road spoiling our formation.  Once out of Bawtry we sailed through Austerfield, all the way to Finningley where we took the quieter Wroot Road.  Over Bank End Road and continuing on Wroot Road we rode past Tia and as no-one was complaining I assume everyone was enjoying themselves... so far so good.  Yours truly needed a comfort break and availed myself of the natural flora and fauna on Wroot Road.  I set about catching the group but upon rounding the bend to Nan Sampson Bank came upon a rather surreal setting... a decapitated deer on one side of the road and a discarded pot plant on the other.  I’m sure that’s what I saw but as I wasn’t with the group at the time and as no-one else mentioned it at all during the ride or the break I’m not convinced that at that point in time I was perhaps in full charge of my sanity.  (Please get better soon Martin).

It was a little breezier along the edge of Black Bank Drain but we continued through Wroot and out on Woodside Lane.  Poles Bank too was a little breezy and Matt and Pete continued at the front, leading us on.  Before we knew it we had ridden along Idle Bank and were on Wroot Road, nearing our destination.  A couple of junctions and we rode into Epworth Garden Centre and proceeded to our usual spot for parking.  A gentleman with a donkey asked if we were allowed (another sanity check for me) and we assured him we were and all was well.

The magnetism of this group of riders has to be seen to be believed as upon entering the Lemon Tree who should we see but Peter and Diane (of Wilby fame).  Orders placed and who should arrive but Martin C (of write up fame).  This is a super stop and despite a mix up regarding two crumpets (a pikelet is not cooked in a ring), which Owen sorted out, I think it is safe to say that the stop was enjoyed by all.  Next... which way back to Tickhill?  At this point no-one objected to a ‘few extra miles’ via Owston Ferry.  I predicted a 1:30 finish to the ride for Alan but was a little out (sorry Alan).

It was however, a very pleasant ride back, Matt bringing up the rear and I took a turn at the front.  Each ascent fragmented the group a little, Gringley especially took its toll but we came down the dual carriageway and down into Clayworth happy and taking the option of smaller groupings.  We re-grouped in Clayworth and continued on to Drakeholes and Mattersey, along the lovely smooth surface which is Ranskill Road.  We had a re-group in Ranskill and for the latter part of the ride we were led out by the Thomas Train (that’s Kevin, Owen and Eleanor, not the tank engine guy).

We arrived back in Tickhill 30 mins. later than I had anticipated ( I hope everyone arrived everywhere on time).  Mention of the day has to go to Sue who having ridden up to Gringley on Walkeringham Road, then completed her longest ride.

Further mention has to go to Matt, who takes on the responsibility of saying whether a ride is safe to go ahead or not for the 9:30 group.  After listening to the number of stories about riders coming off two weeks ago, seems Matt got it right.  Thanks for looking after us Mr. Lowe. 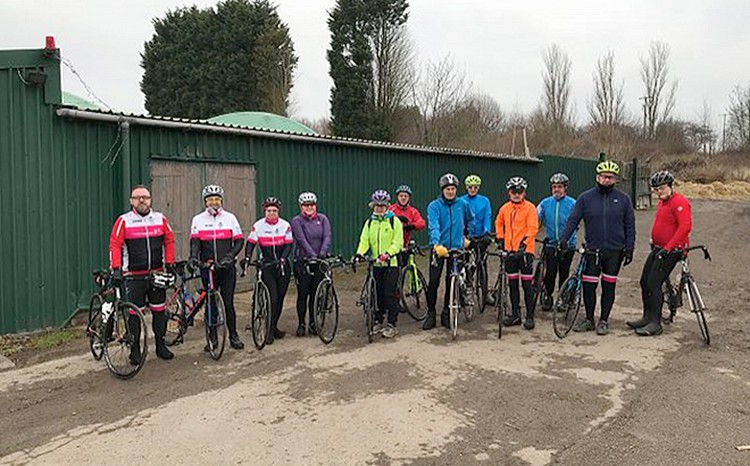